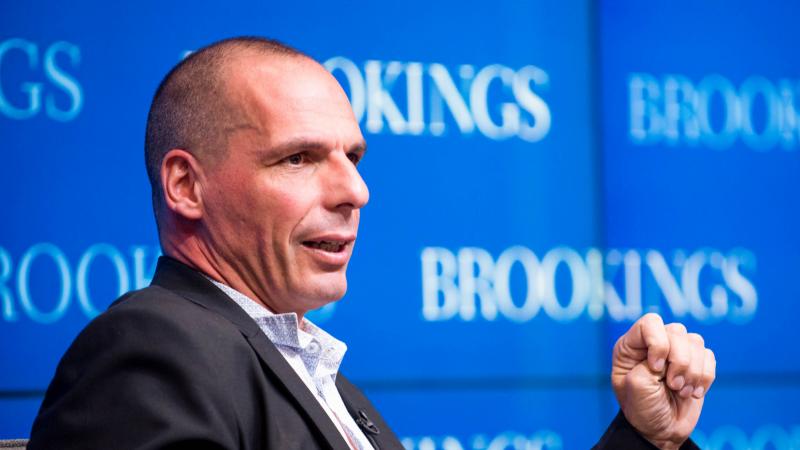 Yanis Varoufakis is not the kind of high-flying politician you’d expect to see staring down the power brokers of Europe. He was a swashbuckling Marxist economist who was unexpectedly chosen to be the Greek finance minister. But during the debt crisis of 2015, when it looked like Greece might default on its debt, Varoufakis found himself in the middle of tense negotiations with the leaders of Germany, France and the International Monetary Fund.

In the end, he lost and was forced to resign. But he came away from the experience with an understanding of who calls the shots in times of crisis. Now, he’s written a book, “Adults in the Room,” which The Guardian has called “one of the greatest political memoirs ever written.” It’s an insider’s account of how global capitalism works and who really has power.

Steve Paulson: You write about a conversation you had with Larry Summers, the former chief economist of the World Bank who was also a senior official in the Clinton Administration. What did you talk about?

Yanis Varoufakis: In that friendly conversation, he said, "In politics there are two kinds of politicians: outsiders who feel free to speak their mind and get ejected from the political system, and therefore make no difference in the end. And insiders who will bite their tongue and never turn against the other insiders. So which of the two are you?"

SP: So he was saying you can either have power or be a truth teller, but you cannot do both.

YV: That's correct, except that the reality begged to differ. Because in the end, this is a tale of people who everybody considers to be extremely powerful and yet who remain utterly powerless in their official positions.

SP: But you had a taste of power. You were the finance minister of Greece.

YV: I had a taste of office. Let's not confuse the two. I had a taste of what it means to be in these rooms behind closed doors with people who do occupy extremely powerful offices. But I was utterly powerless. I was the finance minister of a bankrupt state and I was struggling to negotiate the escape of our people from debtors’ prison.

SP: You were the finance minister of Greece for a half a year during the incredibly tumultuous Greek debt crisis. All the eyes of the world were on you, and you were meeting with all the major players of Germany, France, the European Union, the IMF. Did you like being in those meetings?

YV: No, I wouldn't use the verb "to like." It was extremely interesting and I don't regret it, but anybody who likes being under such pressure — especially under circumstances that were detrimental to your own people — is a fanatic and should have his head examined. But there was one power that I had. I could say, "No, I'm not going to take your money until our existing debt is restructured and made viable." And they were not used to having the finance minister of a small, bankrupt European nation saying no to loads of money. Of course, that money would never go to my people. It would go from one pocket of the creditors to another, extending the bankruptcy of the Greek state while pretending that we were solvent.

YV: That's correct. The only reason why I accepted the position of the finance minister of Greece in early 2015 was because we had what I considered to be a cast iron agreement between us, my Prime Minister Alexis Tsipras and myself, that we would never, ever sign that deal. It was a bailout of the French and German banks disguised as solidarity with the people of Greece. That loan was given to the people of Greece under conditions of swinging austerity that you've never seen in peacetime in the history of the world. And halfway into the struggle, my prime minister, unfortunately, decided to succumb and to surrender. He asked me to stay on with him so that we could surrender together. I refused and I resigned.

SP: How would you describe your politics? Are you a socialist? A Marxist?

YV: I consider myself to be an erratic, inconsistent Marxist. The question about socialism is heavily weighed down by the awful experience of the 20th century and the Soviet Union and the so-called socialist countries, which were appalling places. So we left-wingers should have a great sense of guilt. But the thing that keeps me declaring myself as a left-winger and a socialist is that capitalism was not overturned by the Left. We of the Left failed dismally to overthrow it. But it is doing a fantastic job at overthrowing itself.

Capitalism is creating the means of production, the technologies, that make capitalism obsolete and therefore will create a crisis within capitalism very soon. Artificial intelligence, 3D printers, the Internet and so forth will render corporate structures obsolete. And the question is: what follows that? What's post-capitalism going to be like? This is going to end. Like every mode of production, feudalism ended, capitalism will end. The question is, what comes after this?