The Long and Complicated Relationship Between Islam and the West 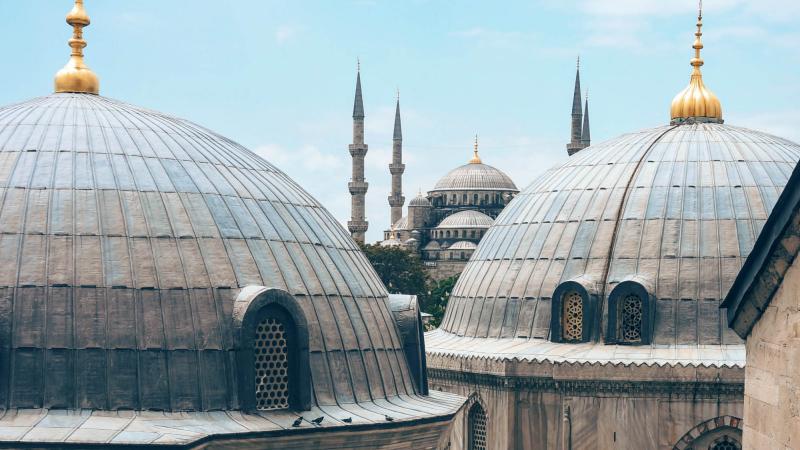 Jerry Brotton is a professor of Renaissance Studies at Queen Mary University of London. He talked to Anne Strainchamps about a history that he has uncovered that goes against everything we've been told about the relationship between Islam and the West. And that history began on a day in 1570, when a letter from the East arrived at the English court.

Jerry Brotton: It arrives in a capsule, and it's written in very beautiful high honorific Turkish to look like Arabic script. It's a letter from the sultan, Sultan Murad III, and it says "greetings to Elizabeth, the Great Princess of England" and starts this remarkable Anglo-Islamic Alliance.

They both exchange letters over the decades. Elizabeth becomes so close to Murad and his Ottoman Turkish royal family, that she starts exchanging gifts with his mum.

We should remember that there are moments where the West and the East, where Christianity and Islam have looked at each other as equal players, and had a cordial relationship.

Anne Strainchamps: It's also the beginning of intense trade between the two countries. What was coming into England from the Ottoman Empire?

JB: Amazing things, because the British wanted the silk that comes from Iran, and the rugs and the carpets that also come from Ottoman territories. They wanted all the spices, the sugars, and the great luxurious Oriental goods that we always think about in our fantasies.

You know, the language changes suddenly, too. You get words like “candy,” “crimson,” and “turquoise.” These are all terms that have come from the Arabic-Ottoman-Persian tradition and enter the English language in the late 16th Century. And it's hidden in plain view.

Look at any Elizabethan Tudor portrait from this period, and look at what Elizabeth is wearing. It’s all from the East. She was wearing silk, taffeta, and Orion Pearl, and we forget that those things came about because of a lively exchange between the two cultures.

AS: This is a story left out of history books – this story of a close alliance between a Christian Queen and the ruler of the Ottoman Empire. Can you put the story in some context? Because it seems like it was not that long since the Europeans, including the English, were taking part in Crusades against the Muslim world.

JB: It is a sea change because the English are, to some extent, involved in the Crusades hundreds of years earlier. And what you've got in the 16th Century is a very different kind of moment – when the Christian church fragments, Lutheran Protestantism emerges and takes on Catholicism, and England goes down the Protestant route. What then happens is that Catholicism, the papacy, says “that is a form of heresy.”

So the English say “Fine. If we're going to be called heretics, we will reach out to our enemy’s enemy,” who are the Ottomans. But we've known for thousands of years that that is how you do political alliances.

AS:Yes, it sounds so contemporary. But it also reminds us just how crafty and wily of a stateswoman Elizabeth was. And this was not the young Elizabeth, this is the Elizabeth in later years, right?

JB: Very good point. I often think of Elizabethan England in this period as a bit like the Soviet bloc in the 1970s and 1980s. There is a theological Iron Curtain isolating England, and so Elizabeth is trying to circumvent this by reaching out to the Islamic world to survive. And there's no doubt that without that support from the Islamic, and particularly the Ottoman Empire, Elizabethan England may not have made it. The Spanish and the papacy were endlessly trying to invade. We know the Armada leaves in 1588 and fails. The Ottomans were possibly involved in that, because the English were trying to split the fleet by getting the Ottomans to take on the Spanish in the Mediterranean.

To me, there is no question that without support from the Islamic world, England, the place I am now sitting in, may be very different. I could speaking Spanish and going to a Catholic Church.

AS: Doesn't this seem like a remarkable thing to you? To say this today, when Western countries like England and the U.S. see Muslims as a threat, and people have even suggested closing borders?

JB: It has such resonance. When I was writing the book, I was talking about these English men, and some women, traveling across places like Aleppo, Baghdad, and Raqqa — places that have such a tragic resonance for us today.

This is not a clash of civilizations. When rhetoric is being peddled in Europe — and of course in the U.S. — about isolation, separation, and segregation, we need to look at historical moments where that was not the case. And there is a surprising one with the iconic Queen Elizabeth I.

AS: But wasn't there still a big theological divide between all these Protestant English people and Muslim Turks?

JB: There was, but what's also interesting is that many of the Englishmen who travel as far as Persia start to see a distinction between Sunni and Shia beliefs in Islam. And there were Englishmen who start saying “you know, all that conflict is not dissimilar to the Catholic-Protestant one that's tearing Europe apart at the moment.”

At the same time, I have stories of English men in the late 16th century —and we believe, also some women — who worked and lived in Islamic lands in the Mediterranean, who openly and freely converted to Islam.

AS: Some of those are wonderful stories, tell at least one of them.

JB: There's an extraordinary story by a man who's called Samson Rowley, who is a merchant from Norfolk in southeast England.

Rowley travels into the Mediterranean in the 1570s, and is captured by Turkish pirates. He is, we believe, castrated, and then converted to Islam. The English ambassador to Istanbul writes to him in the 1580s and says “you are now no longer Samson Rowley, you are known as Hassan Agha, who is the chief eunuch and treasurer of Algiers living in an opulent palace.”

AS: So now he's become part of the ruling Algerian elite.

JB: He has become part of the Muslim ruling elite in Algeria, and the English merchants say to him “would you like to reconvert and go back to Norfolk?”

It sounds quite funny, but you realize that at the time there is not an absolute belief the English Protestantism will survive. And you look at this massively powerful, culturally sophisticated empire, which stretches from Morocco in the west to India in the east, and it's taking on the Spanish Empire and winning. And you think, “whose side do you want to be on?”

So again, we think that obviously, there is a superiority to Christian belief. Nonsense. It’s simply not the case. It is not until much later that people think, “yes, there's going to be the great triumph and rise of the British Empire.”

I think the British Empire rises, the great Raj, and “the sun never sets on the British Empire,” is partly because of this alliance with the Islamic world and the emulation of those imperial policies that the English see at work in the Ottomans.

AS: That just seems like such a historical irony. It sounds like English imperialism was copied from the very cultures that it later subjugated.

JB: I think that's a really important point, because that's why the story has been buried. And it’s no surprise, because in the 19th century, this was a place where the Europeans were basically trying to conquer. That was the whole tradition [of] Orientalism, which said “everywhere in the Middle East was dirty, despotic, and backward.”

It seems to me that that is why stories about the East-West exchange that fluently went on in this period just got lost and weren’t told throughout the 19th and into the late 20th century.

I myself just started working on it early rather spookily just before 9/11. And of course the 7/7 bombings in London were perpetrated by young radical Muslims who were from my home towns of Leeds and Bradford. So, you're right, it seems to me that it has this incredible charge about how you use historical stories today to reach out to tell a different story, and hopefully to reach out for some form of accommodation. And to celebrate and hold on to the moments of plurality, tolerance, and exchange, because they have been there, and therefore, we can hopefully have them again.