A Neuroscientist and a Novelist Put Creativity Under a Microscope 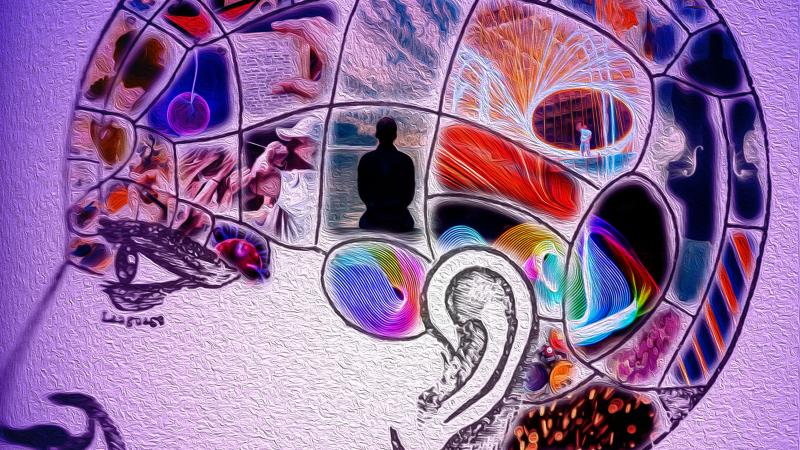 Siri Hustvedt is a novelist and essayist who’s fascinated by the creative process.

She says that on some days, writing feels magical — like channeling the gods. But it can also be unnerving to get certain questions from your readers.

"Someone in the audience stands up after a reading and asks, 'Where do you get your ideas?'" said Hustvedt, speaking with Steve Paulson on "To The Best Of Our Knowledge." "Most writers are annoyed and stumped. But this is, in fact, a profound question. Where does it come from?"

Is there a science of creativity, one that can answer that vexing question? That moment of creation, when something new happens — a new character, or a third act surprise — what sparks it?

It's something that neuroscientists are beginning to look into, and no one is better positioned to explain how the science intersects with the creative process than Hustvedt. In addition to being a novelist, Hustvedt writes about neuroscience and lectures at psychiatry and neurology conferences, both about what science can explain about the creative process and about what she's experienced as a writer that science cannot explain.

Hustvedt gives the example of taking a right turn in a story that you haven't quite mapped out in your head.

"I suddenly realize that one character is going to hit another character over the head — with a book, let's say — and I think, 'That's it! That's right.' It's not because someone in my life hit me over the head with a book and I'm retelling the story; no, this has never happened to me, but somehow I know this needs to happen in the book. Why do I know? Why am I so sure?"

Hustvedt said writing is as physiological as it is mental. Creatively, it almost feels like you’re taking dictation from some other source.

"You have to be relaxed. You have to be open," she said. "When a book is going well, the book knows a lot more than I do. And I just follow it. The characters will take me to places that I was completely unprepared for."

But what precisely is the writer channeling? That's where science has an answer, said Hustvedt. She believes creative, original ideas are rooted in memory — maybe not specific singular memories, but from the sum total of our experiences.

"Think of it this way: people who have an injury to the hippocampus are not only bad at remembering. They're bad at imagining," Hustvedt said. "When they are asked to call up a scene of a jungle, or a beach, their scenarios are often wan and lacking in detail."

Memory and imagination are a single faculty, she said.

So how is it that our brains can feed our humdrum memories back to us as divine inspiration?

Neuroscientist Heather Berlin says that after our daily experiences pass through our self-regulating, socially conforming pre-frontal cortex, we gain creative processing power from other parts of our brain — so long as we're able to release control.

She uses her husband — a hip-hop artist — as an example of how the unconscious mind, when unburdened by the self-conscious pre-frontal cortex, has more capacity for free-flowing, seemingly "strike-of-lightning" moments than our conscious mind does.

"During sleep, during meditation, when you're intoxicated, when you're in the shower and think no one is watching," Berlin said, "When we're in these other brain states where we decrease activation of the prefrontal cortex — or your filter system — it allows those things that are normally being suppressed under the surface to bubble up."

Berlin posits that those moments of unfiltered brain power can unleash these flashes of creativity.

Like Hustvedt, Berlin argues original ideas are extracted from our memories. Moreover, she said truly original ideas don't really exist — our flashes of brilliance are actually things we've seen or experienced, refracted through our memories, that finally bubble up and resurface when we tap into our unconscious mind.

"Genius, I think, is really about taking all of the data, all of the facts, and putting them together in some novel way that no one else has before," Hustvedt said.

That's also why walking away from writer's block is the most productive way to get the creative juices flowing. Your brain is always re-circulating ideas, experiences, information — you just have to give it a chance to surface a new shard of memory to fit into the puzzle.

"Your brain will still be working on it," Berlin said. "You don't have to put in all the work. That can be counterproductive."

But this is only the surface of what might be happening in the brain while creative ideas work their way to the surface.

The physiology of creativity fascinates Hustvedt.

Inspired by studies of people with dissociated identity disorder, where researchers observed different physiological traits for different identities — one may have asthma, while another does not, for example — she wonders whether writers might display similar changes as they write.

"When they move from character to character, or if you're writing a book as someone else, someone very different from you yourself, (I've wondered) if the writer displays different physiological signs," Hustvedt said.

Berlin is a bit more mechanical — what's happening in the head of the greatest creators of our time? Could you record it?

"Maybe something portable, maybe something they can wear," Berlin said. "You want to catch the moment when the sudden, inspiring thought comes to mind and see what happens in the brain — but you want to see the whole process that leads up to that as well. Something where we could record the cells themselves."

Techniques today are pretty primitive when it comes to that kind of monitoring — Berlin envisions some kind of implant that might give us a peek inside the skull protecting a creative brain.

It will be a while before Apple has a wearable device that can get that kind of data. But curious minds can dream.

Wherever these ideas come from — and however science might demystify them — Berlin and Hustvedt stand in awe of the potential we unlock every time a creative thought escapes our brain onto the page, the canvas or a microphone.

"I think there's something magical and mystical about how amazing it is that this three-pound piece of matter can process information in such a way that it can come up with novelty," Berlin said. "That we humans can create things in the world."