The Tentacled Alien From Under The Sea 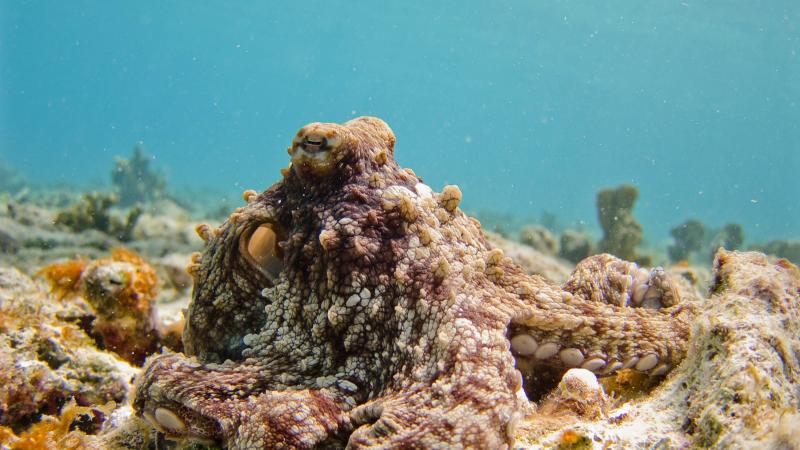 Can we ever really know what an animal is thinking? We might get an inkling for certain animals, like dogs or chimpanzees. But for species totally unlike ourselves, the challenge seems insurmountable. Consider the octopus - that strange, slippery and highly intelligent sea creature. It has no bones and can shape-shift at will and squeeze through tiny cracks. The octopus has roughly the same number of neurons as many mammals, but most of them are in its arms, not its brain. As the Australian philosopher Peter Godfrey-Smith says, “this is probably the closest we will come to meeting an intelligent alien.”

Godfrey-Smith is an amateur scuba diver who’s spent many hours swimming among octopuses near his home in Sydney. He writes about what he discovered in his book “Other Minds: The Octopus, the Sea and the Deep Origins of Consciousness.” He told Steve Paulson that we can barely begin to fathom octopus consciousness.

This Q &A has been edited for clarity and length.

Steve Paulson: I've heard that some octopuses will grab your hand and suck on you. Are they tasting you?

Peter Godfrey-Smith: That’s what they are doing. They are tasting you. So octopuses will reach out an arm and their suckers will attach and touch you. All of those suckers contain a variety of sensory organs but in particular they can taste everything they touch.

If you're in an aquarium and you've used particular soaps or deodorants, those are extremely strong stimuli when an octopus touches you and will make a big difference as to how you come across to them. This is one of several ways in which their sensory world is just completely extraordinary.

SP: What can an octopus do that might surprise us?

PGS: They do things especially in captivity that are often very surprising. Octopuses have in several cases learnt to turn out the lights in the laboratory. They learn to squirt water at the bulb, which will short circuit the light. And they also squirt water at anything they don’t like.

PGS: Right. They can learn to remember individual people. Even if the people are wearing very similar clothes, so there are no obvious cues. The octopus can work out who it's dealing with and will behave differently to people who've been nice to it than to people who have not been nice.

SP: Aren't there also some remarkable stories of escape?

PGS: They are very good escape artists. I think of it as a consequence of several things. One is sheer strength. It's very hard to put enough weight on the lid of an octopus tank that will really keep the octopus inside the tank. They are surprisingly strong animals and often determined to get out if they possibly can.

SP: Aren’t there stories of octopuses that managed to get out of their tank and then go crawling off, trying to get back to the sea or whatever?

PGS: If you’re looking carefully at an octopus in a bucket or a tank but with no lid, you have to keep an eye on it. If you turn your back for a minute, it's gone.

SP: They're watching you to see when you look away.

PGS: That's right. So if you turn your back and then turn again, you'll often see an octopus walking quietly across the floor.

SP: There's one other thing that's truly remarkable about the octopus. There more neurons in the arms - the tentacles - than in the brain.

PGS: That's perhaps the biggest surprise. No one really knows exactly how many neurons an octopus has. The usual figure that people give is about 500 million, which is a lot - certainly larger than any other invertebrate animal. Most of those are not in the head between the eyes in the brain area. Two thirds of them are scattered through the arms, especially in the upper part of the arms. The whole body is a big control system. It's not the case that you have a kind of a CEO/executive part of a nervous system in the head telling the rest of the body what to do. You should think of the whole animal as its own controller.

SP: So the arms are not just taking dictation from the brain? Are you saying the tentacles operate autonomously?

PGS: You might say semi-autonomously. There's a mixture of control. The arms have a kind of exploratory capacity. If you watch an octopus behaving normally, you often see that the animal seems to be focusing on some particular thing but one or two arms might just be roaming around in a way that I think is largely self-directed.

SP: That raises so many fascinating questions. Does an octopus have a sense of self? Or does it have multiple selves? Is there a kind of a self in the arms and a different self in the brain?

PGS: One possible view is that once you get the partial breakdown of centralization, the whole notion of a single self just dissolves. I think octopuses certainly have experiences. I think it feels like something to be an octopus. When we have experiences, there's a sort of unity to the thing that has the experiences. In the case of the octopus, that may not be quite the right model. I doubt that the right model is one in which each arm is its own little self, its own little center of experience, but how we should compare them to the sort of experience we have is a very difficult question.