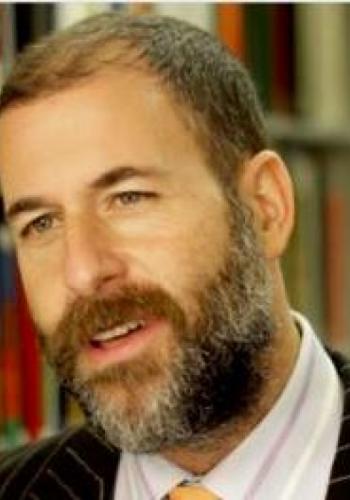 Born in Freeport, New York, he was trained as a sculptor at the Rhode Island School of Design and graduated with a BFA in 1984. Goldsmith worked for many years within the art world as a text-based artist and sculptor before becoming a writer.[2]

Motivated by his own 2007 manifesto "Uncreative Writing"[3] and notion that "any language can be poetry",[4] Goldsmith has been the editor of one continuous project of innovative poetics, comprising both the study and practice of conceptual poetry as a writer, academic, and the curator of the archives at UbuWeb. In his own words, "I guess what I write is poetry. But I clearly don’t write traditional poems. I’ve never written a sonnet. Poetry is so generous that it can take a hybrid practice like mine and claim it as its own and support it in a way fiction isn’t able to."[5] He places conceptual poetic practice within the realm of activist poetry.[clarification needed][6] His process, which involves self-induced constraints, has produced 600 pages of rhyming phrases ending with the sound r, sorted by syllables and alphabetized (No. 111 2.7.93-10.20.96, 1997), everything he said for a week (Soliloquy, 2001), every move his body made during a thirteen-hour period (Fidget, 2000), a year of transcribed weather reports (The Weather, 2005) and one edition of The New York Times, September 1, 2000, transcribed as Day (2003). Goldsmith's practice embraces the performance of the writer as process and plagiarism — as content.

Goldsmith hosted a weekly show on WFMU, the New Jersey-based freeform radio station, from 1995 until June 2010, using the broadcast name of "Kenny G". The show was an extension of Goldsmith's writing experiments, his pedagogy and UbuWeb. His programs were titled (for various extended periods) "Kenny G's Hour of Pain,"[9]"Anal Magic"[10] and "Intelligent Design."[11]

He has also had numerous collaborations with musicians and composers. In 1993, Goldsmith embarked on a collaboration with avant-garde vocalist Joan La Barbara, resulting in a CD and book 73 Poems published by Brooklyn's Permanent Press.[citation needed] In 1998, the Whitney Museum of American Art commissioned vocalist Theo Bleckmann to stage an interpretation of Fidget.[12]

In 2004, Goldsmith released a CD with People Like Us called Nothing Special and has done many radio performances with Vicki Bennett.[13] The next year he collaborated with guitarist Alan Licht to stage an evening length performance of The Weather, as well as excerpts from Fidget. He has also collaborated with musician David Grubbs with texts from Fidget.[citation needed]

In 2006, he performed in the TRANS-WARHOL, Chamber Opera, a libretto based on his book I'll Be Your Mirror; The Andy Warhol Interviews. The project was a collaboration with choreographer Nicolas Musin, composer Philippe Schoeller and Ensemble Alternance. The opera premiered at the Bâtiment des forces motrices in Geneva, in March 2007.[14]

Goldsmith has written about experimental music on the article A Popular Guide to Unpopular Music and has curated many musical events and compact discs. He was a musical curator for the Whitney Museum of American Art's The American Century, Part 2, which included 73 Poems. In 2004, he curated a CD for the Sonic Arts Network in London called The Agents of Impurity. In 2006 he organized a CD for the Institute of Contemporary Art, Boston called The Body is a Sound Factory. Also in 2006, he organized an 8-hour-long performance at the Sculpture Center (New York City) of Erik Satie's Vexations "Pianoless Vexations" (UbuWeb) for any instrument other than piano.[citation needed]

From 26 July to 31 August 2013, Goldsmith curated a conceptual art project called Printing out the Internet in collaboration with LABOR and UbuWeb, that invited the public to print and send pages from the Internet to an art gallery in Mexico City, with the intention to literally print out the entire Internet.[15]

Goldsmith dedicated the exhibition to Aaron Swartz, an Internet activist who committed suicide while facing federal charges of illegally downloading and disseminating millions of files from the digital library JSTOR.[16] As Goldsmith said in an interview, "The amount of what he liberated was enormous — we can’t begin to understand the magnitude of his action until we begin to materialize and actualize it. This project tries to bring that point home."[17] By the end of the project, Goldsmith had accumulated over 10 tonnes of paper from more than 20,000 contributors.[citation needed]

He teaches in the University of Pennsylvania's English Department. His courses have included "Uncreative Writing," "Interventionist Writing," and "Writing Through Art and Culture," among others.[18]In addition, Goldsmith has run a graduate seminar at the School of the Art Institute of Chicago entitled "Publishing as Project." He taught uncreative writing at Princeton University during 2010 on a Anschutz Distinguished Fellowship in American Studies.[19][dead link]

In October 2007, a documentary film of Goldsmith's life and practice, Sucking on Words,[20] by filmmaker Simon Morris was screened at Shandy Hall in Coxwold, England, and in London. The film was premiered at the Eccles Center at the British Library in London and subsequently screened at the Oslo Poetry Festival in November 2007.[citation needed]

On May 11, 2011, Goldsmith was featured at President and Mrs. Obama's celebration of American poetry at the White House.[21] He read works by Walt Whitman and Hart Crane, as well as from his work Traffic. Other performers that day included: Billy Collins, Common, Rita Dove, Alison Knowles, Aimee Mann, Jill Scott and Steve Martin and the Steep Canyon Rangers. During the afternoon, Goldsmith led a poetry workshop for high school students with the first lady.[22]

In 2012, Goldsmith's book Uncreative Writing: Managing Language in the Digital Age was awarded the Association Study of the Arts of the Present Book Prize.[23]

The next year, he was appointed the Museum of Modern Art's first Poet Laureate.[1] His tenure included a series called, Uncontested Spaces: Guerilla Readings, in the MoMA Galleries where, as part of his Poet Laureate program, writers were invited to choose works in MoMA's collection, develop a response, and then select a space in the Museum galleries in which to perform the resulting readings and texts. Participants included David Shields, Sheila Heti, Rick Moody, John Zorn, Stefan Sagmeister, Charles Bernstein, Christian Bök, Vanessa Place, Maira Kalman, Heidi Julavits, Alex Ross, Vito Acconci, and others. Every Friday, from January to July 2013, Goldsmith himself contributed readings in the galleries.

He was awarded the 2016 Prix d'Honneur from the it:Festival international du livre d'art et du film in Perpignan, France.[citation needed]

On March 13, 2015, Goldsmith read his poem "The Body of Michael Brown" at the "Interrupt 3" event at Brown University.[24][25] The poem was a reading of the autopsy report issued by the St. Louis County Coroner's Office on the shooting of Michael Brown, an African-American teenager who was shot and killed by a white police officer in Ferguson, Missouri, on August 9, 2014, setting off local protests that spread to many cities nationwide. Goldsmith explained his process on Facebook: "I altered the text for poetic effect; I translated into plain English many obscure medical terms that would have stopped the flow of the text; I narrativized it in ways that made the text less didactic and more literary."[26] Notably, he moved the autopsy's reference to Brown's genitalia to the end of the poem.[27] The reading was met with controversy.[28]

Brown University professor John Cayley stated that the video recording of the poem will not be released to the public, as requested by the poet. Goldsmith said that he is, "requesting that Brown University not make public the recording of my performance of 'The Body of Michael Brown'. There's been too much pain for many people around this and I do not wish to cause any more.[29]"

He lives in New York City with his wife, artist Cheryl Donegan, and his two sons.[citation needed]