A Graphic Telling of 'The Lottery' 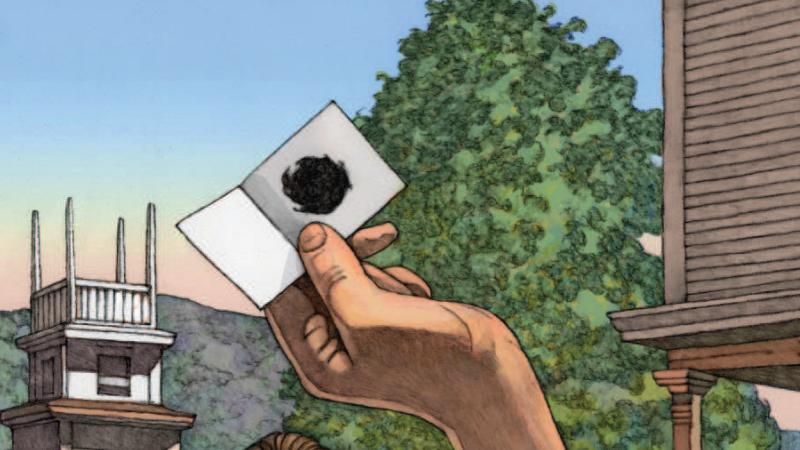 Stills from “The Lottery,” courtesy of Hill & Wang.

In adapting “The Lottery” from its classic short story format into a full-length graphic novel, Miles Hyman faced a daunting task. As the grandson of Shirley Jackson, the iconic short story had followed him for much of his life, as far back as when Jackson herself babysat him as a toddler.

But despite the difficulty of translating the story’s subtlety and foreboding to a new medium, Hyman felt drawn to the challenge. “I felt an odd connection to the story early on,” says Hyman in an interview with Rehman Tungekar. “It’s one of those stories where you take something different away from it every time you read it.”

The recently released graphic novel version of the tale is, in Hyman’s view, much more than simply an illustrated version. Instead, it represents an entirely new reading of the much beloved short story. He walked us through a few of the specific ways that the graphic medium lends itself to a unique but true-to-form take on the tale.

Hyman: “This scene isn’t just decorative. It brings us into the story with two very carefully planned, intense moments. The first creates this atmosphere of foreboding, that something mysterious is taking place. The second is that it gives us the tools of “The Lottery” right from the outset. We have the black box, the pieces of paper, we know that one of them has a black spot on it. It allows us to show those things to the reader, rather than explaining it in words.”

Hyman: “What was absolutely important was that the graphic novel adaptation works on the same level as the original. And that the ending is as shocking and disturbing as in the written version. It’s a very short, short story, but the graphic novel prolongs the action — it’s 135 pages — and so I really take my time to develop a sense of the place.”

Hyman: “I spent a lot of time thinking about how to make sure that the story’s secrets are never really unveiled until the end. The trick is that there’s so much hidden in that original story that when you go from a purely written form to a visual form, you’re showing so much, and therefore potentially giving away a lot of what’s about to happen, which would obviously mean that you had failed at your tasks. I wanted to be careful not to do that.”

Hyman: “I really studied Shirley Jackson’s use of language. How she went about maintaining the suspense, and having the end — which we sort of guess all along, but don’t really want to believe is going to happen — how to have that happen on a visual level was a huge challenge.”

Hyman: “One of the ways I went about doing that was sort of in the way she does — by focusing on the small things. By focusing on the gestures. On the glances exchanged between villagers. On the simple phrases that truly don’t mean anything between neighbors — greetings and comments.”

This piece was also published on Medium.